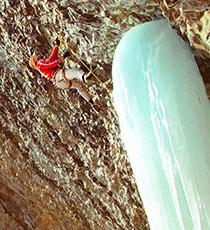 Conrad Anker’s specialty, simply put, is climbing the most technically challenging terrain in the world. This quest has taken him from the mountains of Alaska and Antarctica, to the big walls of Patagonia and Baffin Island, and the massive peaks of the Himalaya.

Conrad’s Antarctic experience spans a decade, with first ascents in three regions. In 1997, Conrad teamed up with Alex Lowe and Jon Krakauer to climb Rakekniven, a 2,500-foot wall in Queen Maud Land. In the Sentinel Range, Conrad climbed the Vinson Massif via three new routes. His climbs in Pakistan’s Karakoram include the west face of Latok II along the “Tsering Mosong” route, which begins at the same height as the summit of Denali, climbs 26 pitches on a vertical cliff and then tops out at 23,342 feet.

In 1998, Conrad and Peter Croft made a first ascent of Spansar Peak via a 7,000-foot ridge in one day. In Patagonia, he climbed the three towers of the Cerro Torre Massif. On Yosemite’s El Capitan he joined Steve Gerberding and Kevin Thaw to establish “Continental Drift,” a steep nail-up on the right side. And in Zion National Park, Mugs Stump and Conrad first climbed the intimidating “Streaked Wall.”

In May of 1999, as a member of the Mallory & Irvine Research Expedition, Conrad discovered the body of George Mallory, the preeminent Everest explorer of the 1920s. The disappearance of Mallory and Sandy Irvine on their summit bid in June 1924 is one of climbing’s great mysteries, and Conrad’s discovery and analysis of the find has shed new light on the pioneering climbs of the early expeditions. Conrad graduated from the University of Utah and lives in Bozeman, Montana, with his wife and three sons. He is a board member of the Conservation Alliance, the American Alpine Club and the Alex Lowe Charitable Foundation. He stays in shape by climbing, running and skiing.