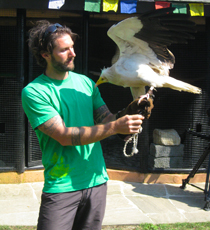 Adventure athlete, Jeff Shapiro is a dedicated professional in all of his outdoor pursuits. A hang glider pilot for more than 2 decades, he represented the US at the 2009 and 2011 World Hang Gliding Championships and is one of the first people to explore mountain flying in a hang glider within the Annapurna range of Central Nepal.

In his more recent past, Jeff has BASE jumped and flown Wing Suits from objects worldwide. Opening many new “exits” in the US, he now jumps and flies on the cutting edge of this new and exciting art as one of very few pilots actively seeking out remote North American objectives to jump from and fly in his Wing Suit. Jeff’s 25 years of climbing in the mountains is an essential component toward the exploration required for these new flights.
As a climber, Jeff is at home on all mediums. From rock, to ice, to technically difficult high altitude mixed climbing, he continually strives for adventure and self-exploration. He has climbed 8b+, WI 7 and finds high value in establishing new routes around the world. Completing a first ascent on the steep NW face of Mt. Grosvenor in the Daxue Shan range of Western China is one of many highlights.

With experience gained as an athlete, Jeff uses his education in Industrial design at his shop in Montana to design and manufacture “new toys to play with in the mountains”. Most notably, he designed a competition class hang gliding harness (Wills Wing Covert) and parachute deployment system widely considered “elite” by the hang gliding community. Some of his other passions include ultra trail marathons and the art of Falconry.