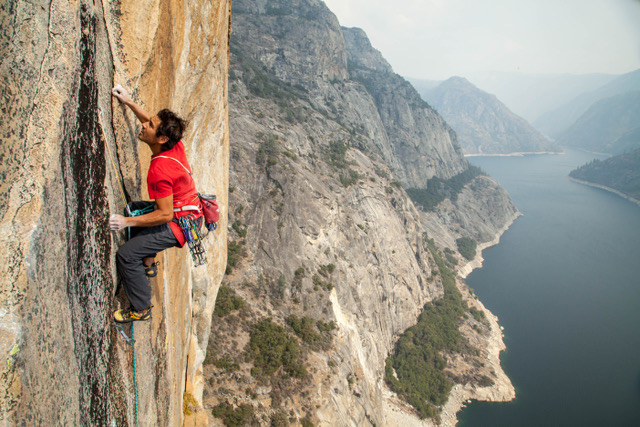 My first rock climbing experience was through a high school program named the Urban Pioneers; through this program I learned the basics of climbing and eventually continued to learn on my own.  Whenever I got the chance I would take weekend trips out to Yosemite in an attempt to climb. At some point all I wanted to do was be outside climbing and adventuring. After graduating high school I packed up my truck and headed for Yosemite.  Year after year I would follow the same routine, work some job in the bay area just long enough to save up to go climb again for the majority of the season.  I traveled around California, Utah, Oregon, and Nevada, but most of my time was spent close to home in the Sierra Nevada mountain range.  I made a ton of new friends, learned from some amazing climbers and scaled most of the classic Yosemite climbs.  In 2008 I made one of my dreams come true when I free climbed El Capitan up the Freerider route in an early multi-day ascent.

Some of my first notable ascents I’ve accomplished are: first free ascent of Wapama Rock, a 1,500 ft big wall in Hetch Hetchy, Yosemite. In the High Sierra, I created one of the hardest single pitch alpine routes named Nalazak 5.13 up a rope stretching 70-meter (all-styles) climb on the Incredible Hulk.  I’ve traveled to Malaysia to establish a new route on a previously unclimbed tooth of rock known as the North Dragon’s Horn, and established another route on an adjacent formation on the South Dragon’s Horn.  In Yosemite Valley I established the modern free route Romulan Warbird 5.12c on Fifi Buttress and Mahtah 5.12d on Liberty Cap.

Most recently I’ve been exploring and learning the process of establishing sport climbs as well as crag maintenance. As climbing gains more popularity/notoriety in the world I think it is important to have experienced climbing stewards for our lifestyle, sport, and community.

My time spent in Yosemite helped shape me into the climber that I am today.  By far my most memorable climbing experiences have been on new routes.  The adventurous spirit inside me loves the exploration involved with first ascents.  The entire process of a new first ascent excites me.  Seeing a new wall with no known routes, jamming into cracks that have never seen human travel, these things intrigue me like nothing else.  The feeling of climbing into the unknown is wild and mysterious.  I love it!  I live for it!

Climbing is and will always be part of who I am.  It’s a way for me to express my creativity and it’s evident in the routes I establish.  The wall is my canvas, the routes are my art; the adventure and experience is unique every time.  I have always been a firm believer that the rope should be a climber’s most important piece of equipment. BlueWater Ropes have always stood above any other rope with their durability and handling.  I wouldn’t trust my life, or my partners on anything but the best.